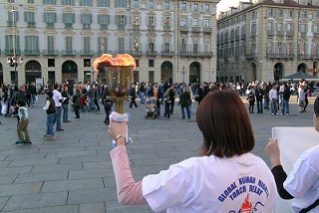 On October 25th and 27th 2007, the Coalition to Investigate Persecution of Falun Gong (CIPFG) held two rallies in Rome and Turin to support the Human Rights Torch Relay.

A similar rally was held on October 27 in Turin, Italy. Claudio Tecchio, the representative from the Cisl Union, and senator Lucio Malan attended the rally and gave speeches. They condemned the persecution and called on the Chinese government to respect human rights. Senator Malan proposed a resolution which would require the Italian media to report on human rights issues in China when reporting on the 2008 Olympics.