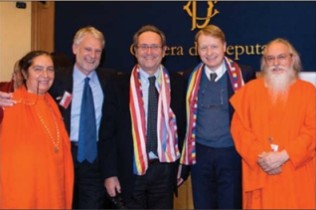 ON DECEMBER 11, 2012, after a long struggle, Hinduism and Buddhism were granted official recognition under Italian law. This huge step towards religious freedom and equality throughout the country marks the first time the Italian government has legally acknowledged Eastern religions. Senator Ceccanti stated, “This is an extremely important decision which demonstrates our capacity to expand the system of religious freedom outlined by the Italian Constitution, along with its ability to go beyond the traditional Judeo-Christian context.”

THE DECISION RESULTED FROM an agreement between Parliament, the Italian Hindu Union and the Italy Buddhist Union. The Hindu Union received the government’s official recognition as a religious assembly in 2000 and worked hard ever since to promote religious equality. Its efforts have been a major factor in this successful outcome. Their stated aim is to disseminate the ancient Hindu traditions and promote collaboration among all people who practice the Hindu religion, pursuing common goals while respecting the diversity and freedom of all.

THERE ARE NOW BETWEEN 75,000 and 115,000 Hindus in Italy, including some of Italian descent. Before this agreement, their religion was not legally acknowledged. This meant, for example, that Hindu weddings were not recognized under Italian law. With this new recognition, Hindu weddings are now legally binding. Hindu temples and other places of worship have also gained better legal protection. Italian Hindu groups can now open schools and have access to state funding.