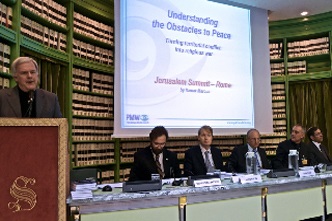 The Jerusalem Summit Rome 27-29 January brought together influential Israeli and Italian politicians and experts in the Library of the Italian Senate in Rome. The Israeli delegation included Knesset members Dr. Arieh Eldad and Deputy Minister Ayoub Kara, Dr. Dmitry Radyshevsky (Director of the Jerusalem Summit) and Itamar Marcus (Director of the Palestinian Media Watch). The Summit was hosted by Lucio Malan, Senator and Secretary of the Presidency of Italian Senate. […]

One of the key issues of the Rome Summit was the continuation of anti-Semitic and anti-Israeli hate propaganda and indoctrination of Palestinian children perpetrated by the Palestinian Authority (PA). The Summit documented Nazi-style brain-washing which is continually and relentlessly conducted in Palestinian schools, universities and the media with the use of EU funds and financial assistance rendered to the PA Government by the West.

Another issue expounded at the Rome Summit is the continued persecution of Arab Christian minorities in the Middle East. It was truly electrifying to hear the Moscow-born Israeli, Dr. Radyshevsky, encouraging Italy and all Christian-based European nations to speak up for Christian minorities and demand equal rights reciprocity when negotiating with Muslim states.

Senator Professor Mario Baldassarri, President of the Senate’s Finance Commission, stressed that Europe has to put stringent safeguards against the abuse of its financial aid and to develop alternative energy to free itself from the oil dependence and entailed constrictions in pursuing a principled policy towards undemocratic regimes.

Senator Malan announced that he plans to advance legislation curbing these abuses. […]