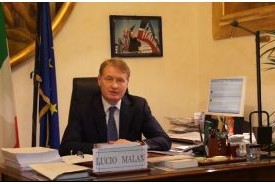 The nefarious activities of the Iranian regime in Iraq and in the region has pushed many people into the arms of the terrorist group ISIS, Italian Senator Lucio Malan has said in an interview with the ncr-iran.org website. He described ISIS, which claimed responsibility for the November 13 terrorist attacks in Paris which left 129 people killed, as a “cancer” which threatens humanity.

“The recent events in Paris have outraged all the civilized world. The condemnations of this act of terrorism are widespread, and I completely echo all the harshest condemnations toward this group of criminals who use religion for hate and for the interest of their groups and of their fanaticism,” said Mr. Malan, who is a Quaestor of Italy’s Senate. “The West should not make the mistake of supporting all the parties who claim to be against ISIS”, he said.

“There must be the largest coalition, a coalition as large as possible against ISIS, but we should not forget that some of those who are against ISIS are just promoting another kind of terrorism and financing terrorism in other parts of the world. I think about the regime of Tehran that is supporting some ISIS opponents but they are supporting as well some other terrorist groups who have spread terrorism in many countries for decades.”

Iran’s regime is “financing terrorism” around the world, Senator Malan added. “There is the terrorism that is helped by the actions of Iran in Iraq; the actions of their Shiite fanatics in Iraq has pushed many people into the arms of ISIS because they are looking for someone to defend them since the government of Baghdad doesn’t do it.”

“I am in solidarity with the people who have been attacked in Paris,” he said. The fight against ISIS on the battlefield must go hand in hand with support and solidarity with the “movement of the Iranian Resistance led by madam Rajavi, because we must remember that as long as Tehran’s regime exists, the danger will be for all the world” due to its terrorist threats and sponsorship.