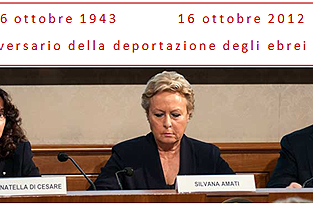 An Italian Senate Committee debated modifying the law on Holocaust negationism to enable the courts to imprison anyone found guilty of denying the Holocaust to up to three years in jail. The debate coincided with the 59th anniversary of the rounding up of Rome’s Jewish community, and was witnessed by representatives of Rome’s Jewish community, including Riccardo Pacifici, President of the Hebrew Congregation of Rome and Chief Rabbi Riccardo Di Segni.

Proposing the bill, Senator Silvana Amati declared herself “excited and satisfied” at the initiative which has attracted support from across the political spectrum. Fellow senator Lucio Malan added that Holocaust denial is not only a crime of opinions, but also has the potential to promote incitement.