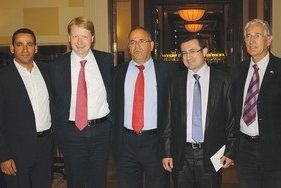 “Telling the truth is the first duty of anyone in a position of responsibility,” Italian Senator Lucio Malan tells the ‘Post.’

“Italian Senator Lucio Malan was in Israel on Tuesday to receive an award recognizing his commitment to defending the State of Israel. The fourth annual ‘All Nations Convocation’Government Leadership Award was bestowed on Malan at the Knesset in a ceremony coordinated by the Knesset Christian Allies Caucus. The ‘All Nations Convocation’ was established in 1994 as a Christian organization devoted to Israel advocacy and reconciliation between Jews and Arabs in the Middle East”.